The one-stop viewing gallery for Weapon, Shield and Bow Ornaments! What they look like and how to get them!

Appeal for your shield...  flash for your slash... glow for your bow! - Bonzz

Weapon, Shield & Bow Ornaments (Primary, Secondary & Range) are NOT part of the Hero's Forge ornament system and will not go onto your Hero's Forge Key Ring.

The difference between them is that Hero's Forge Ornaments have to to be activated (DB Cash) and are for visible worn gear (Slot 21... Head, Feet, Chest, etc.).  Ornaments for Weapons, Shields and Bows are "held" items (Slot 20... Primary, Secondary, Range) and they do not require any form of activation or Marketplace expenditure in order to use them.

I have not been able to specifically narrow down exactly when ornaments (of any kind) first appeared in the game. The first augmentations of any kind (Slot 7, Slot 8, etc.) were introduced with the Lost Dungeons of Norrath expansion, back in September of 2003... but they were not Ornaments. Hero's Forge was introduced via Patch in August of 2012, during the Veil of Alaris era. Player Crafted Ornaments were introduced with the Underfoot expansion (December 2009, Pottery Skill). The oldest posting I have stumbled across about ornaments is from August of 2007 (The Buried Sea era).

It appears that Weapon, Bow and / or  Shield ornaments were introduced somewhere during the time of (7) different expansions (Gates of Discord, Omens of War, Dragons of Norrath, Depths of Darkhollow, Prophecy of Ro, The Serpents Spine, or The Buried Sea)... which is a (3) year span between February 2004 and February 2007 (back then, there were two expansions each year).

Many of the original Ornaments were actually a combine container, most of which, seem to have been Player Crafted (some were even called 'Molds'). You put your weapon, shield or bow inside and then combined it. The container was consumed (lost) and your weapon / shield / bow took on a new look, but was otherwise unchanged.

The change was 'permanent,' which did not go over too well with Players, so the Ornamentation Stripping Tool (sold by many Vendors, to include Magus Alaria in the Guild Lobby) was added to the game.

The Ornamentation Stripping Tool is also a container, for which you placed your weapon / shield / bow inside and combined it. The container is consumed (lost) and your weapon/ shield / bow is returned to it's original appearance. You do not get the original Ornament back.

Since that time, Container type ornaments have essentially been removed from the game all together. They were converted into being actual Ornaments (rather than containers). However, that does not mean Players might not have still have some Container Ornament lingering in their inventory, even to this day. For this reason, these listings include the 'Container' Ornament type, when my research indicates they once had a Container version.

Otherwise, Container Ornaments can no longer be acquired. 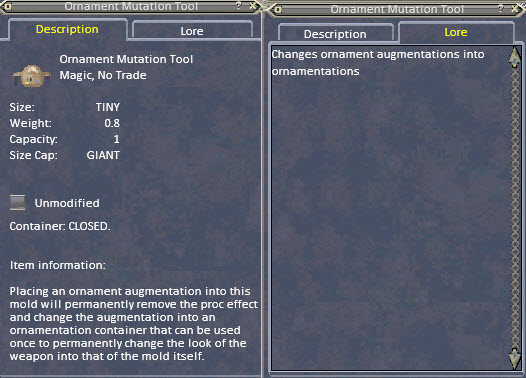 There are also Ornaments that are actually Augmentations, that fit into Slot 4, Slot and / or Slot 8 Augmentation slots. In fact, they still exist, and they all seem to be related to the Legends of Norrath game / Marketplace items.

Most, if not all, Augment based Ornaments have a Proc attached to them, so they are not only an Ornament, but a Proc.

With that, the Ornamentation Mutation Tool, (sold by many Vendors, to include Magus Alaria in the Guild Lobby) was added to the game.

UPDATE: The February 2022 Patch Notes included: "Many weapon ornaments will now fit in more items. Restrictions have been relaxed." Many Ornaments that were say, 'Two Handed Blunt only," were changed to 'Two Handed Weapons Only." If you see any ornaments that are on the wrong Ornaments page (or any other concerns), PLEASE let me know!

These Ornaments should work with any Blunt Weapon (One Hand or Two Hand).

These Ornaments should work with Piercing Weapons (One Hand (1H) or Two Hand (2H).

These Ornaments should work with any Slashing Weapons (One Hand or Two Hand).