These events resurface every year, in conjunction with April Fool's Day (April 1st), some of which remain active for about two (2) weeks.

These days, the 'Dev Pranks' are limited to just the Guild Lobby, where these 'pranks' rotate all day long, on April 1st (and only on April 1st). 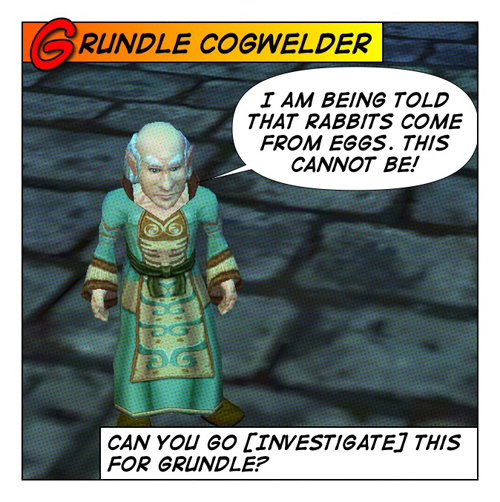 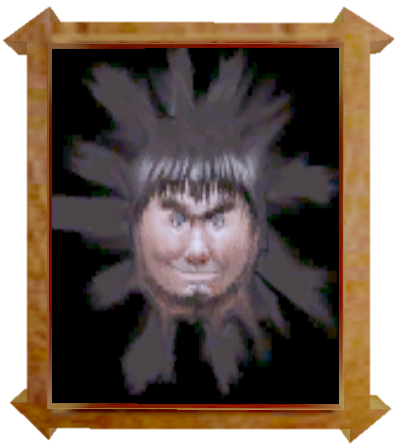 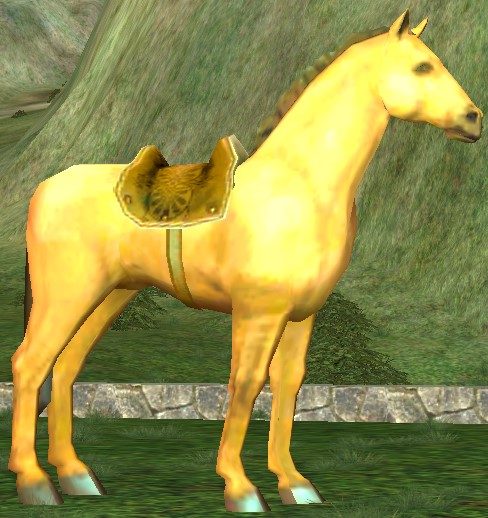 This quest is not given by an NPC, it just happens... and it can ONLY happen on APRIL 1ST!

Yes, you read that correctly! You can only do this on April 1st (on the real life calendar, not the Norrath Calendar).

So, all you need to do is log in on April 1st, and then literally just start zoning around.

Head zone-to-zone-to-zone and at some point, you will randomly get a buff called the 'Gift of Laughter.' This buff should stay on you until midnight, Pacific time (real time). Otherwise, you should not be able to remove the buff.

You should see emotes such as...

You let out a hearty chuckle.
You light a firework. Weeeee!

The reward is a suffix, 'the Lunatic,' and a Painting: Haunting Laughter.

The Painting: Haunting Laughter is placeable. If you right click it, you can select 'Stare Into Madness." If you do, you will either hear one (1) of three (3) types of laughter... or you will be Teleported to Shard's Landing. You will likely have to 'Stare Into Madness" many, many times before you actually get Teleported.

NOTE: Year round... not just on April 1st... if you have access to a Painting: Haunting Laughter that has been placed by another Player... and you do not yet have the Achievement: Bristlebane Day - The Gift of Laughter... you can "Stare Into Madness" until you get Teleported to Shard's Landing. When that happens, you will get the noted Achievement and your own Painting: Haunting Laughter! However, you can only get the suffix, 'the Lunatic,' from the zoning on April 1st (until you get the 'Gift of Laughter' buff, which you can still do / get the next time April 1st rolls around).

While it is usually active when Bristlebane Day rolls around, it is actually part of the 10th Anniversary Quest series, outlined here.

Hail him and follow along, or just try saying, 'ready,' to get this task.

This is the Level 90-plus version.

You are here to kill a yodeling gorilla (Level 90), until you have looted five (5) Music Book.

Give him the five (5) items you looted (Step 2) and hail him to finish.

Once you have completed his solo task (see above), form a group of at least three (3) Players / Mercenaries. Then hail and follow along, or just try saying, "investigating," to get this group mission.

The say to him, 'Hubadee dubadee doo," to zone in to the instance.

2) PLANE OF KNOWLEDGE: THIS AIN'T RIGHT: Once inside, you should see Bobo Gleemaker, nearby.

Hail him, and follow, along if need be, for an update. This will lock the task.

3) PLANE OF KNOWLEDGE: THIS AIN'T RIGHT: Now you need to do the following, for several updates:

4) PLANE OF KNOWLEDGE: THIS AIN'T RIGHT: Head back to Bobo Gleemaker.

Give him the three (3) items you looted in Step 3 (above) and then hail him.

He will then have a riddle for you to answer. The answer is 'Bee."

Bristlebane, King of Thieves will then spawn.

Hail Bristlebane, King of Thieves to spawn an ornate chest. Open it and inside you will find a Hobby Horse (a mount that doesn't move... it is Bristlebane day!), for the group to roll on.

Now hail  Bobo Gleemaker to finish up. Say to him, "Bubadee dubadee loo," to zone out.

You can chose between coin / experience or a Mini Jokester (placeable item), as your reward.

1) HOW TO: This Achievement is completed by way of doing the 2011 Solo Task & Group Mission:

1) PLANE OF KNOWLEDGE: You are here looking for Emissary of Bristlebane.

He is near the main (aka 'big') bank. Hail him and follow along, or just try saying, "more," to get this Quest.

You should receive a Fool's Pie Recipe and ten (10) Prankster's Pie Mix.

2) PLANE OF KNOWLEDGE: You now need to to acquire the ingredients you need, which are all sold by Chef Denrun. He is in the 'baking' building near the 'small' bank.

While you technically only need ten (10) of each, buying twenty (20) can save you from having to go back and buy more later.

Inside an oven, combine, one (1) each, of the ingredients from Step 2 (above) with one (1) Prankster's Pie Mix.

While this is a technically a no-fail Baking combine, this combine can fail when it explodes in the oven. It is Bristlebane Day, after all!

If you need more Prankster's Pie Mix, just go back to Emissary of Bristlebane and say, 'More.'

5) PLANE OF KNOWLEDGE: Once you have the ten (10) gems you need, head back to Emissary of Bristlebane.

Hail him and he wills send you off to get more gems.

7) PLANE OF KNOWLEDGE: Once you have the ten (10) gems you need, head back to Emissary of Bristlebane.

Hail him and he will send you to get the gems cleaned.

8) PLANE OF KNOWLEDGE: Now head over to Audri Deepfacet. She is in the building behind the main (big) bank.

Hail her and / or give her the gems (from Step 6) and you will get a Bag of Polished Gems.

9) PLANE OF KNOWLEDGE: Head back to Emissary of Bristlebane.

Give him the Bag of Polished Gems, to finish up.

You should get Achievement: Bristlebane - A Fool's Errand, and a Fool's Pie (a click item to throw pies at other Players, with 50 uses).

There doesn't seem to be an impending prank that will happen, other than he seems to have used you to collect gems for him to horde.

This task will scale based on your Level. This is the (96+) version walk through of the task.

At lower levels, you can, and will, get sent to different zones, but otherwise, the task steps are the same (get a location updates and throw some tarts).

You will be given thirty (30) Tasty Throwing Tart (a click item to 'Throw Pie').

2) SEPULCHER OF ORDER:  You are here to get location updates and throw pie.

You will not be able to throw pie at the same MOB more than once, however, despite the task step wording, you are not limited to throwing pie only at specific NPC's of that exact name. As long as the NPC is the same Model (race or monster type), it should work.

You are here to:

Once done, you should immediately be assigned the next task (see below).

1) CRESCENT REACH: After you finish the first task (above), you should have been immediately assigned this task, automatically (see above).

You will be given Tobo's Empty Flask.

You now need to acquire some items.

If you all ready had any of them, you should have automatically received an update for them.

While you are here, you need the following items:

Before you head to the next zone, make sure you have bait and a fishing pole (any kind).

2) CLAN CRUSHBONE: Head just inside this zone, to the river on the left, and get to fishing!

You need to fish up (one of each) the following:

3) THE MINES OF NURGA: You are here to forage.

You need to forage up one (1) Sponge Mushroom.

Once you have it, go ahead and combine the Celandine Herb, Fishing Grubs, Ginger, Fish Scales, Boar Carp & the Boar Carp in Tobo's Empty Flask to make ten (10) Tobo's Oinomancy Obfuscating Tonic. (aka 'T.O.O.T.').

The NPC's are (they are on different levels, so three points are provided):

Once done, you will get five (5) Perfectly Serious Beverage To Drink (Stat Drink) as a reward.

Hail him and follow along to get this last task.

He should give you Tobo's Attercop Potion (a 5-use Recluse Spider Illusion Potion).

2) CRESCENT REACH: Go ahead and use the Tobo's Attercop Potion, to turn yourself into a Recluse Spider.

You now need to go 'scare' some NPC's, by running up to them, targeting them and then /say Boo to them.

NPC's will then either make a comment, or you will scare them. It may take doing this to more than one NPC to get the update in each section, so if it doesn't work the first time, target another NPC in the same area and /say Boo to them, until you get an update.

You need to scare the following NPC's (if the noted NPC's don't work, simply try another NPC in the same area):

Once done, you will get five (5) Perfectly Serious Food To Eat (Stat Drink) as a reward.

1) INFO: To complete this achievement, do the three (3) 2022 Bristlebane Day solos tasks:

As a note, you can do these quest again, by simply talking to Tobo Gleemaker again.

1) CRESCENT REACH: This is  a collection set that can completed wile Bristlebane Day Events are active.

It can be completed year round, if you can acquire the items from other Players, that may have extras.

These items are ground spawns in Crescent Reach (all areas, all floors).

You can complete this Achievement by acquiring and collecting one (1) of each of the follow items: