When you feel overwhelmed, never fear... after all, there's always Overseer! -- Bonzz

This page is all about the Overseer feature (game) in Everquest (EQ).

Overseer is a game-within-a-game, much like the Legends of Norrath (LoN) card game used to be.

Overseer is more integrated into EQ than LoN was, even though there is no stand-alone version / application like there was for LoN (you have to log into EQ to play it).

It is a generally passive side-activity that you can play in down time... or do while you play EQ normally (meaning it is not something you actually have to give full attention to).

It is directly integrated into EQ in that the optional / varied Quest Rewards can include actual in-game rewards, in addition to Overseer-only rewards.

>>>All known agents are listed at the bottom of this page.<<<

To play Overseer, you must first log into Everquest with a character that is Level 85 and on a server that has the Seeds of Destruction expansion unlocked. Because of this Level 85 requirement, you cannot play Overseer when you are Shrouded (Shrouds only go to Level 70).

You can play on Free-to-Play accounts, under the same qualifications, noted above.

You can not play Overseer, separately, on every character that you have on the same account and on the same server. Overseer is an account-server wide game. Due this, if you change servers with a character, all of the Agents and Overseer progression they had access to on the previous server, will be lost.

To be more specific, lets say you have (8) characters that are Level 85+ on the Bertoxxulous server. All (8) of them can open and play Overseer, but they will be sharing the same Overseer game. They are not playing separate / different Overseer games.

This applies to each qualifying server that you may have qualifying characters on.

To play, you can open up the Overseer Window with the command /overseer, or use the link from the EQ Button (EQ --> Quests --> Overseer).

Either way, you will open up the Overseer Window that has four tabs. It will automatically open to the first tab.

The Overseer Window may appear on your screen is a size that does not clearly reveal all of the sectioned windows on each tab, and in particular the Quests Tab. You can drag and resize the entire window, as well as most of the individual window sections, in order to get it to a size that suits you best.

One tricky section is on the Quests Tab is the Agent section (right side middle window). That section may just have one Agent selection box, or two, or three... or more! The more Agent selection boxes a Quest has, the deeper that section will get. Luckily, there is a scroll bar on the right side. Use the scroll bar rather than trying to resize the Overseer Window and / or that section to see them all at the same time, as the Overseer window is quite large.

Overseer Quests, if they succeed, offer one or more Quest Reward options that you can choose from. 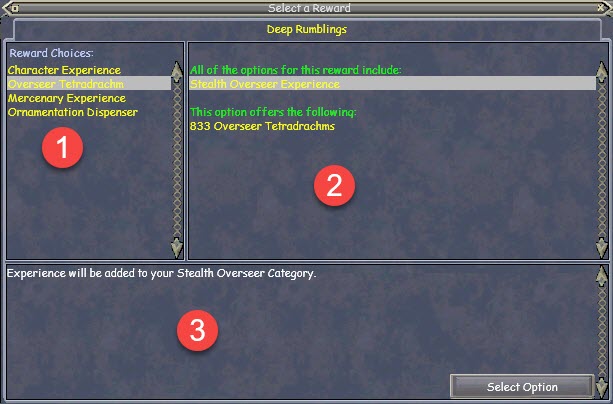 When you finish a Quest successfully, you will see a "Collect Reward" button. Click that and you will get a "Select a Reward" (Quest Reward) window, to select one of the reward options with.

Rewards options can include one, or more, of the following:

The Agents Tab is where you can see all of the Agents that you currently have.

Agents are the characters that you assign to do quests for you.

Additional Agents can be acquired in (3) different ways: 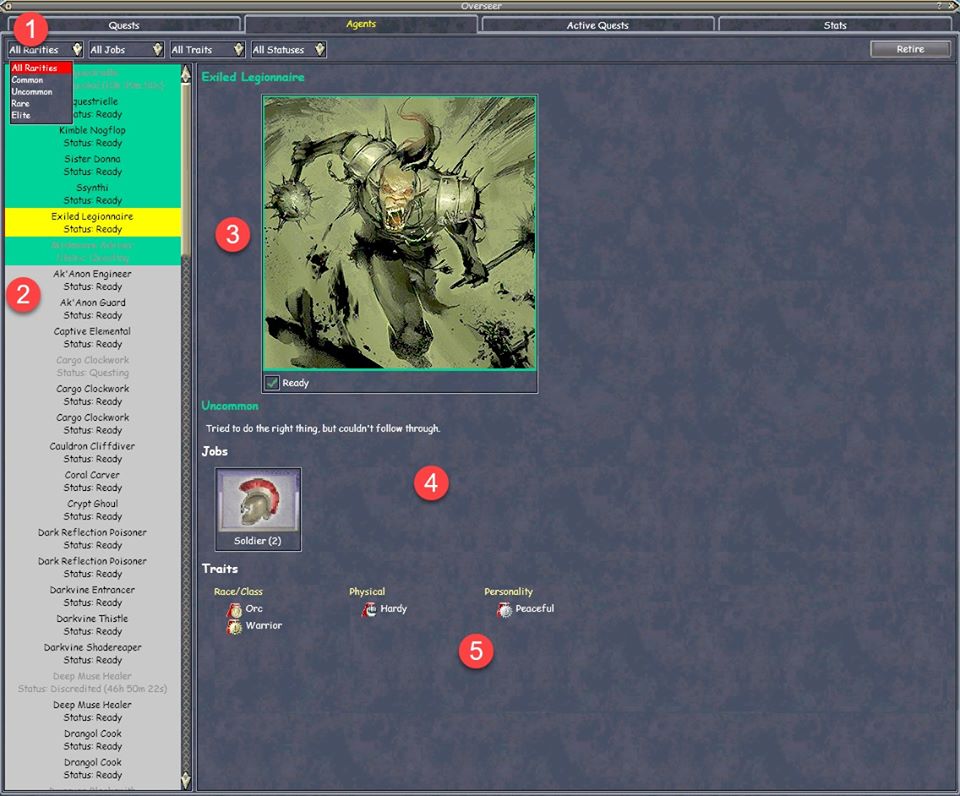 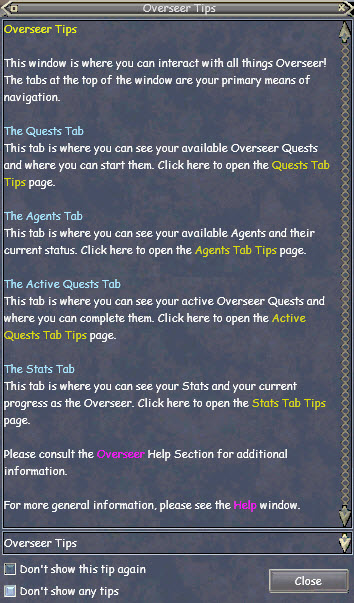 In the top right side corner of the Agents Tab in your Overseer Window, there is a "Retire" button.

This button will "retire" whatever Agent you currently have selected. Whenever you do this, you will get a claimable item.

With an Uncommon Agent you will get an item called "Uncommon Agent Echo." This item can be claimed to select experience for any (1) of the (11) Stats categories, to include Recovery; or, you can take (2) Common Agents (randomly selected, you do not get to choose them).

With a Rare Agent you will get an item called "Rare Agent Echo." This item can be claimed to select from experience for any (1) of the (11) Stats categories, to include Recovery; or, you can take (2) Uncommon Agents (randomly selected, you do not get to choose them).

With an Elite Agent you will get an item called "Elite Agent Echo." This item can be claimed to select experience for any (1) of the (11) Stats categories, to include Recovery; or, you can take (2) Rare Agents (randomly selected, you do not get to choose them).

You cannot retire a Common Agent, but you can trade them up (3 for 1), with a Quest called "Common Conversion." What happens is that you trade in (3) Common Agents (they will be removed from your Agent listings) to get (1) random Uncommon Agent (that will be added to your Agents listings).

HOWEVER... keep in mind to trading up Agents it is a 3 for 1 trade out. Thus, at the very minimum, it means at least 27 Common Agents are technically needed to acquire 1 Elite Agent. So, retiring Agents may not the best option, unless you have 3+ of the same type of non-Iconic Agents, or 2+ of the same Iconic Agents. Trading up does reduce your overall Agent pool by (2) Agents every time you do it, and having a variety of available Agents with assorted Job skills and Traits is essential for undertaking the Quests. In short, you don't want to deplete your Agents pool!

You may notice that some Agents include the word "Iconic" in their category classification.

Iconic Agents can only be use one at a time. Thus, even if you have (5) of the same Iconic Agents, when you use (1) of them on a Quest, the other (4) become unusable (they can not also be sent out on a Quest). In fact, if one becomes "Incapacitated" -- they all are! Think of Iconic Agents like "Lore Equipped" for items in the game. You can possess more than one of them, but you can only use (equip) one of them!

As a note, Uncommon Agents are never Iconic, thus retaining at least (2) or more of them, at all times, might be a good idea.

There are (3) Statuses your Agents can have, as follows:

Rarity might be best thought of as Agent Levels... 1, 2, 3 & 4. The higher the level, the better and more varied their Job skills can be. They can also have a wider range of Traits.

This makes them more versatile and useful in not only making certain Quests possible to undertake, but in having the beneficial Traits that can better insure the success of those Quests.

Be wary if you do this! Keep in mind that Agent Job skills and / or Traits are needed to undertake Quests and / or boost the chances that those Quests will succeed. If you trade too many away, you can loose Agents with needed Job skills and / or Traits. It is a good idea to build up a pool of Agents, especially Common (non-Iconic) Agents, before trading them up. With Iconic Agents, if you only have one of them, never trade them out. Try to make sure you have at least one of each!

You can also acquire higher level Agents via the Marketplace or, potentially, as Quest Rewards.

The Rarity of an agent is can also be determined by the color in which the agent is highlighted, such as on the Agents Tab: Common = Gray; Uncommon = Green; Rare = Light Blue; Elite = Yellow.

The Quests Tab of your Overseer Window is where you select quests and assign Agents to undertake Quests.

LIMITATIONS: You can only have (5) quests active at the same time (on the Active Quests Tab). You can only complete (10) quests per rotation (aka quest cycle, or every 12 hours). 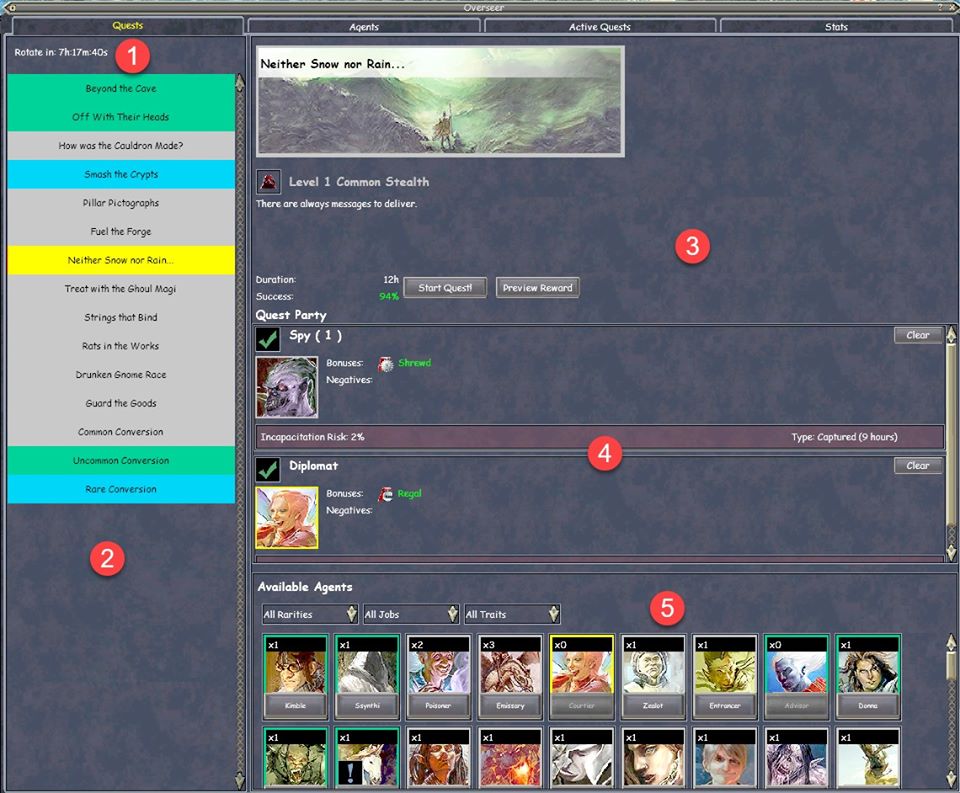 Traits is a multi-faceted category, that covers race, class, physical attributes and personality.

Every Agent will (should) have a class and a race, at a minimum.

They may, or may not, also have physical and / or personality Traits.

These Traits are beneficial / needed ("Bonuses") attributes for Quests, that serve to increase the chances a Quest will be successful.

However, they can also be detrimental Traits ("Negatives"), that can reduce the chances of success for Quests.

Sometimes, an Agent may even have both "Bonus" and "Negative" Traits, at the same time.

The Trait categories are:

Jobs are a determining factor on if you can undertake any given Quest, or not.

Example, you may see a Quest where the first Agent requires "Scholar (3)." If you do not have an available Agent with a Scholar skill level of (3) (or higher), you will not be able to undertake that Quest.

Agents that show a Question Mark ("?") (#2 in below image) mean the listed requirements are optional, and they can be used even if they don't have any of the listed Job Skill requirements. However, meeting those requirements does increase chances of success, as do the listed Traits). 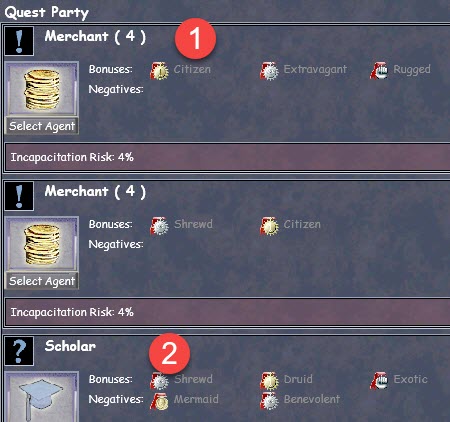 Additionally, if you do not have any Agent that meets qualifications at all, you will probably not see certain Quests, to start with (you may only see Quests for which you have at least (1) Agent that qualifies for one of the required slots).

The Job categories are:

The Active Quests Tab of your Overseer Window is where you can see the Quests that you currently have active (in progress).

You can only have five (5) active Quests at any given time. This includes Quests that have technically finished, but you have not yet clicked the button to finish them (rather they they fail or succeed. Until you do that, the Quest will remain on your "active" list continue to be counted and an "Active" Quest.

Quests can take a varying amount of time, from about 10 seconds to 24+ hours. You can expedite this process using Marketplace funds -- with no guarantee of success if you do so (they can still fail), or you can simply wait on the timers and let them finish on their own. 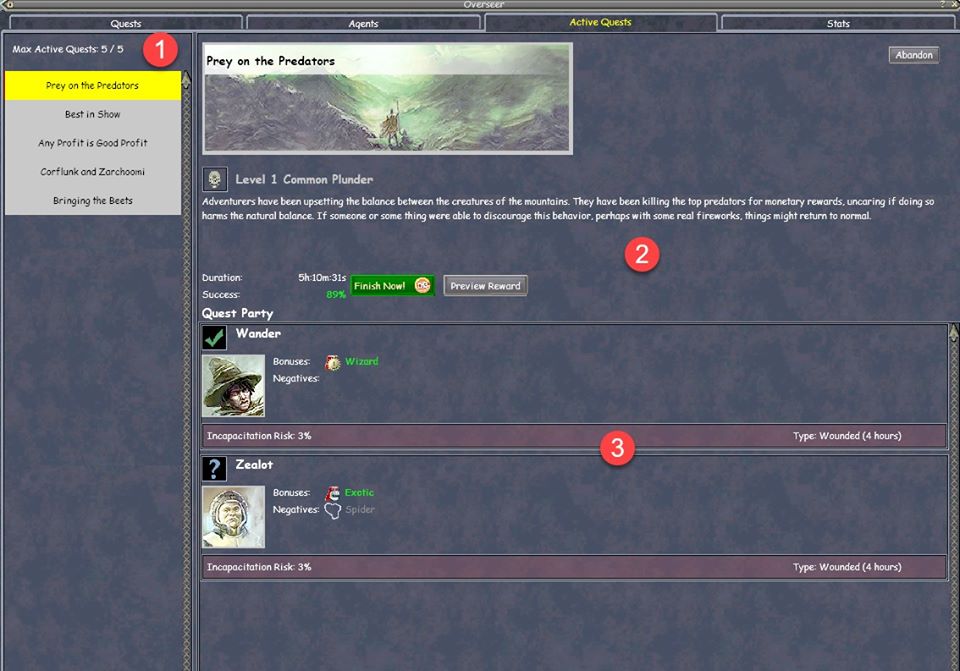 The Stats Tab of your Overseer Window is where you can see your Stats, related to  "Progress" Levels and Agents. 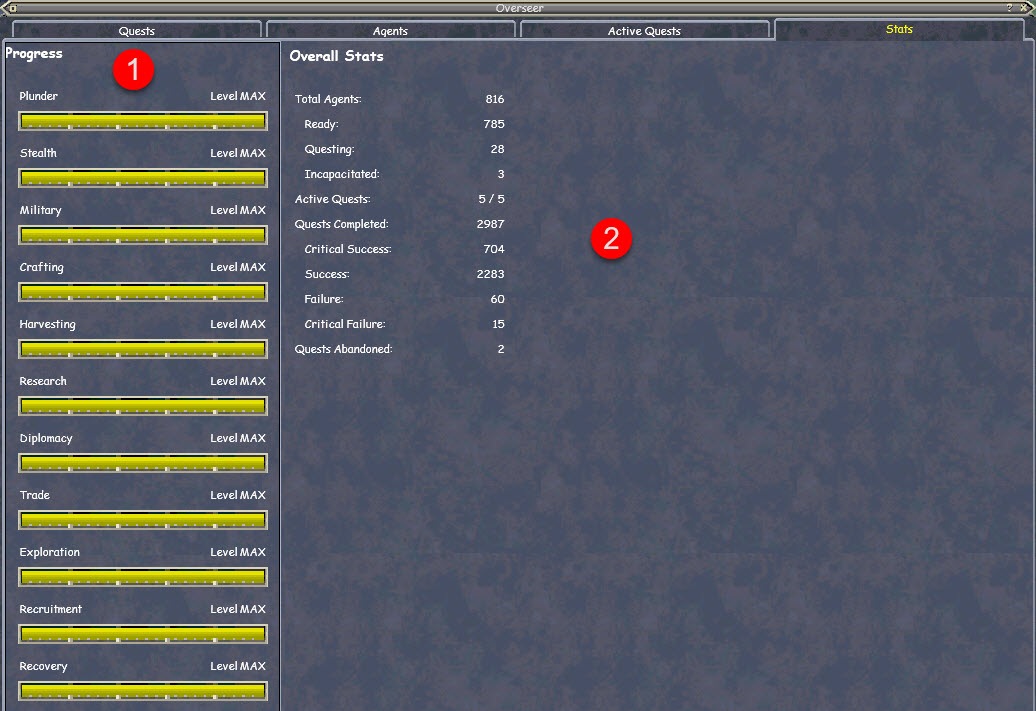 Your Stats can be viewed in the Stats Tab of your Overseer Window.

They show you an Agent overview (count), Quest results / history (counts), and your "Progress" in the (11) categories of Overseer experience.

Overseer Tetradrachms are yet another form of Everquest alternative currency.

Overseer Tetradrachms can be spent / used with the specialty Overseer Vendor, to purchase various items.

The alternative currency, Overseer Tetradrachms, one of the potential Quest Rewards from Overseer Quests, can be used (spent) via the specialty Overseer Vendor ("a mysterious presence"), who is found in the Plane of Knowledge, on the behind the library.

There is rumor that more items "may" be added to this vendor, in the future.

The Marketplace is optionally tied into Overseer in three ways. Using Marketplace funds, you can...:

Use of the Marketplace is 100% optional. You can 100% play Overseer without using any Marketplace Funds at all. 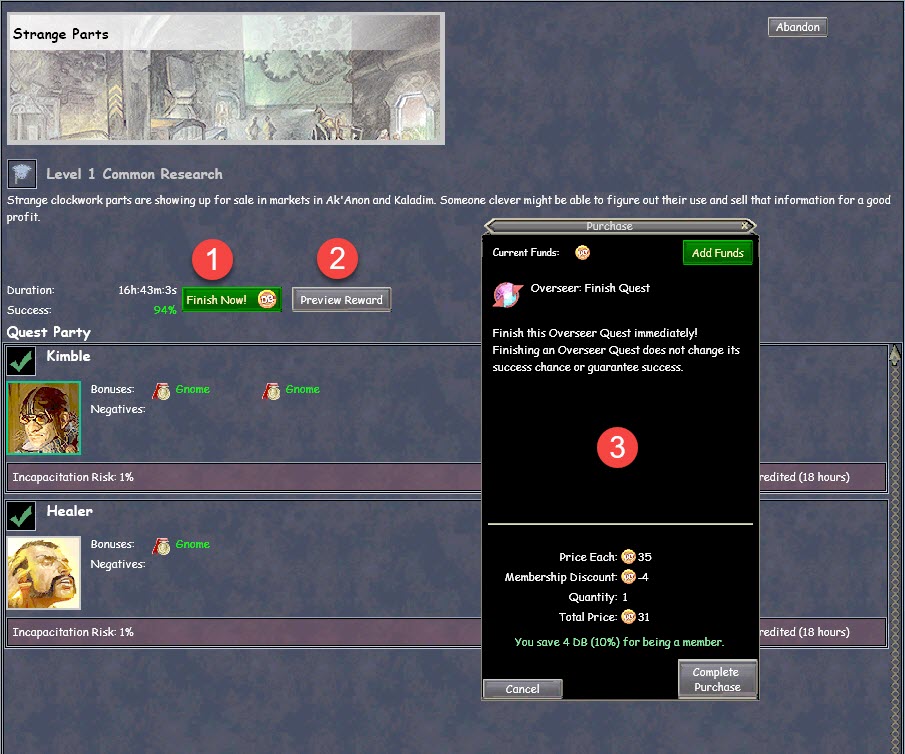 Overseer is basically a game where you assign Agents to go do Quests for you.

Each Quest can take a varying amount of time (from a few seconds to days, in real time). If successful, you can claim a Quest Reward.

You can only undertake (5) Quests, at the same time.